A metaphor for something 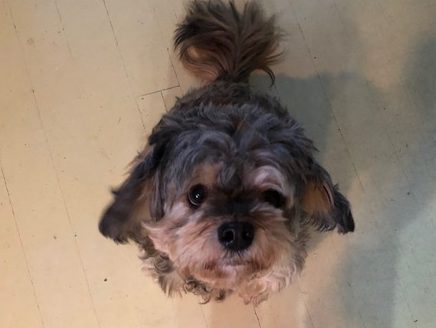 A terrible thing happened to my dog. I left her outside a store, and when I came out ten minutes later, she was gone. I had tied her leash to a post that had a length of metal chain – about three feet long – attached to it. She must have tugged at the leash until it came free.

Plum hates being left outside stores. I only do it when I have to.

I rushed down the street looking for her. Someone said they had seen a dog racing towards the intersection, another told me they had spotted her bolting through the park. I followed each direction, but never arrived in time to catch her. She was going too fast.

Plum is a small dog, and fairly tubby. She never bolts or races anywhere, except to chase squirrels.

I searched along the main street, down to the pond, and then retraced my steps back to the store without finding her. At last, not knowing what else to do, I went back to my house. As I went up the stairs to the front door, I heard a faint rattle. I peered under the small table on the porch and saw Plum. She was shaking visibly. The chain from the post outside the store was tangled up in her leash. It rattled when she turned her head, and each time it rattled, her shaking got worse.

At once I realized what had happened.

The chain had chased her, clanging and ringing, all the way from the store. It had kept pace with her no matter how many roads she crossed, or corners she turned, and the faster she ran away from it, the louder and more terrible it had become. Somehow she had made it home, but now she was too frightened to move in case it began chasing her again.

I took off the chain and led her indoors, although no amount of soothing words or offers of treats could console her. I had to lie down with her on the bed for half an hour, petting her head, before she finally stopped shaking.

“It wasn’t a monster,” I told her. “It was just a stupid chain tangled up with your own leash. All you had to do was stop.”

I think it must have been one of the worst days of Plum’s life, up there with the day she had to have surgery on her leg, and the time an out-of-control husky bit her in the dog park. Poor thing, I thought, poor foolish thing, although she isn’t the only one.

Aren’t most of us – one way or another – just as foolish?

Attached to our fears. Trying to run away from them at the same time.

2 responses to “A metaphor for something”