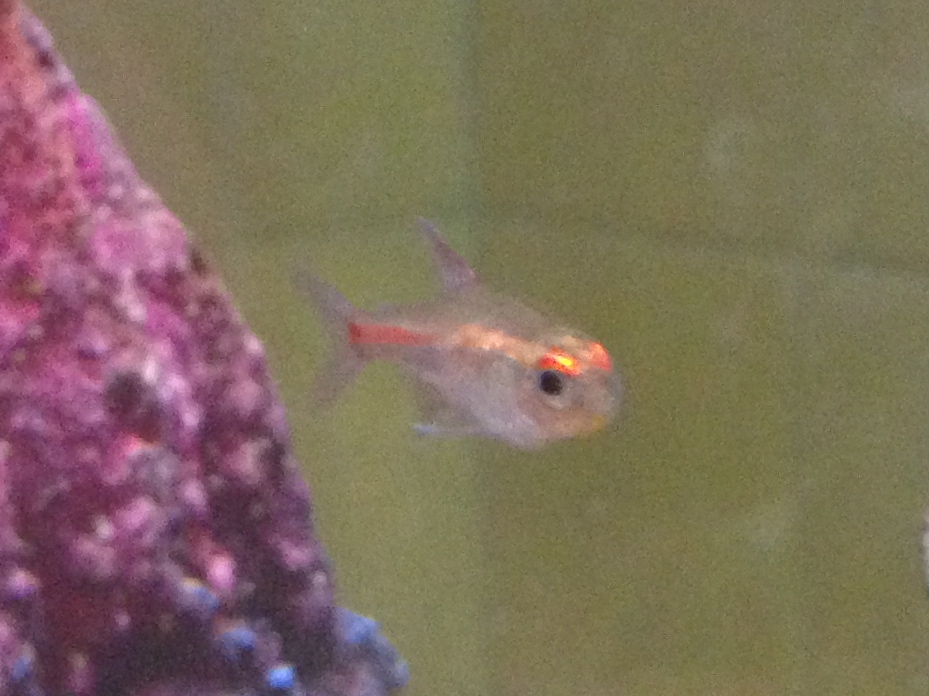 Over three years ago, everything in our big fish tank died, except for two snails. I was going to clean it out, but it was a chore, and I kept putting it off. Then, weeks later, I happened to glance through the green-smeared glass and saw a fish. It was no bigger than a pencil shaving and almost completely transparent. You could see all its workings; the orange thread of its innards, the tiny pulse of its heart. I didn’t know how it had kept going without food or light for all that time.

I switched on the tank’s light and filter system. In the electric glow, the fish’s innards looked bright, almost fluorescent. I thought maybe it had survived simply because it had been forgotten about, in the way that plants sometimes flourish when you neglect to prune or water them.

I decided the only way to keep it alive was to carry on ignoring it.

It was ridiculous to keep the big tank running for the sake of a fish the size of a fingernail but I didn’t dare buy any more fish, or even clean the tank for fear of disturbing it.

Every so often, I sprinkled a bit of food in the water, trying not to notice whether Miracle Fish ate it. I made an effort not to look for the creature, although I couldn’t help myself. It was always there. Months went by. One day I couldn’t see it and I felt a rush of panic, but a moment later it emerged from the depths of the plastic volcano in the middle of the tank. I wondered what thoughts it was capable of, whether it ever questioned – as I did – the point of its miniscule, solitary life.

It wasn’t like the two snails still trundling around the tank. They had shells to record the passing of their lives. When they died, their shells would remain. But Miracle Fish had nothing to leave behind. The story of its life would die with it.

Would I kill Miracle Fish if I started to feel sorry for it?

Had I put it in danger merely by naming it? I told myself that Miracle Fish wasn’t really a name. It was just a description. Like ‘good dog’ or ‘nice handbag’. Time passed. The fish was even more transparent, but still there. I began to wonder whether the secret of immortality lay simply in being…overlooked. It was possible that Miracle Fish would live forever.

And then, last week, it was gone. I couldn’t find its body. I think it was so small it must have dissolved.

It was just a fish.

It was just a fish. And the story I had made up about it was just a story. This should console me. But it doesn’t. It is the very reason why I feel so sad.