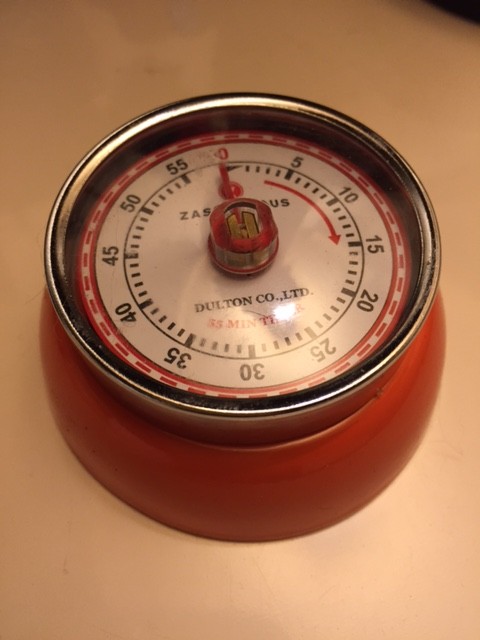 I just bought this timer. The plan is to eliminate all procrastination in my life forever.

Procrastination is a huge problem with me. Whole mornings sometimes pass before I write a single sentence. It can take a week to make a phone call. I fold laundry so slowly that clothes from the waiting pile often get worn, washed and returned to the heap before I get around to putting them away.

All this will now change. The rule is simple. I decide on a task, I set the timer. I do the task until the bell rings.

The timer is small, but it has mysterious authority. It is hard to disobey. I set it for forty-five minutes yesterday and wrote two whole pages. Then I set it for twenty minutes and cleaned up the kitchen. A quarter of an hour later I had written three emails that I had been putting off for days, and made an appointment for the dentist. That would normally be a whole day’s work, right there.

The timer gives me the feeling that someone – or something – else is in charge. A higher power. Under its rule I may actually become a fully functioning, productive member of society.

Plus it is orange. Almost always a good thing.