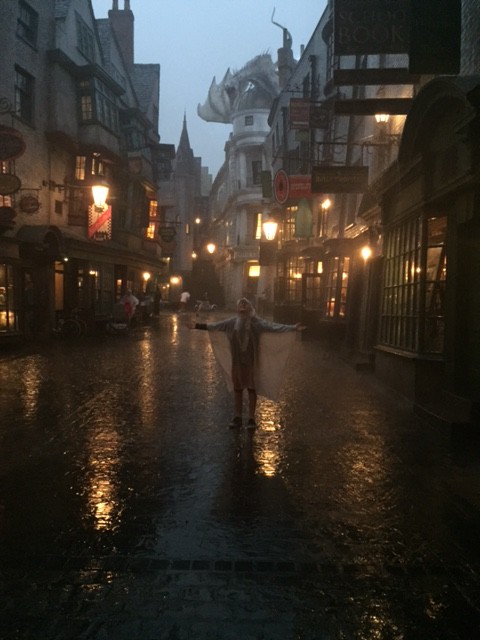 Happiness can’t be planned. I always forget that fact.

I was reminded of it last week at Universal Studios in Florida. A theme park is a place where all happiness is planned, down to the last detail. They give you a map. You know what rides to take, how long you’ll have to wait in line, where to stand during the parade and what you’ll eat for lunch.

It’s not that it isn’t enjoyable, it’s that after a whole day, a kind of anticlimactic feeling starts to set in. By the evening JR and I were sitting in a restaurant eating pizza and feeling low. We’d waited for ages to get a ride on the Hogwarts Express and Diagon Alley had been crammed shoulder to shoulder. JR had battled through hundreds of shoppers to buy a wand but using it to do spells meant competing with a dozen other kids, all waving their own wands at exactly the same time.

To make matters worse, it was dark and raining when we got out of the restaurant. We put on our plastic ponchos and stood glumly, wondering what to do. It started to rain harder. Hordes of people hurried down the street.

It was the kind of rain that soaks you to the skin in seconds, even when you’re wearing a plastic poncho.

Inspiration struck. Everyone was leaving. We took off running in the direction of Diagon Alley.

There were plenty of people sheltering in the corners, but the alley itself was empty. There wasn’t anyone in line at the Hogwarts Express either. Platform 9¾ was almost deserted. We got on the train, grinning triumphantly at each other from under the hoods of our dripping ponchos.

The rain had stopped by the time we arrived at Hogwarts and we took off our ponchos. There were only a handful of people waiting for the hippogriff roller coaster. We got into the front carriage and it began to trundle up the long, steep slope.

That was the moment the storm really hit. Cracking thunder, sheets of rain. A voice came over the park’s loudspeaker: Due to inclement weather the park is closing early…make your way to the exit…

Did they mean us? Had they forgotten the roller coaster was still running? There was no time to figure it out. Our carriage was already teetering right at the top of the slope. A bolt of lightning lit up the towering, craggy walls of Hogwarts and for half a second I thought – I really thought – we might plunge straight off the tracks.

I was still screaming when the ride came to an end. We hobbled out, wet through, laughing like crazy people. We splashed down the road to a stall selling souvenirs. JR wanted to buy a hippogriff pin. The girl at the stall glanced at our dripping figures. “I’m sorry about the weather,” she said in a timid voice. “It must have ruined your evening…”

“Oh,” she said at last. “You’re being sarcastic. I have a problem picking up on sarcasm…”

It wasn’t any use. She didn’t believe him. It was unkind to laugh but we couldn’t help it.

Happiness can’t be planned. I don’t know why I even try.